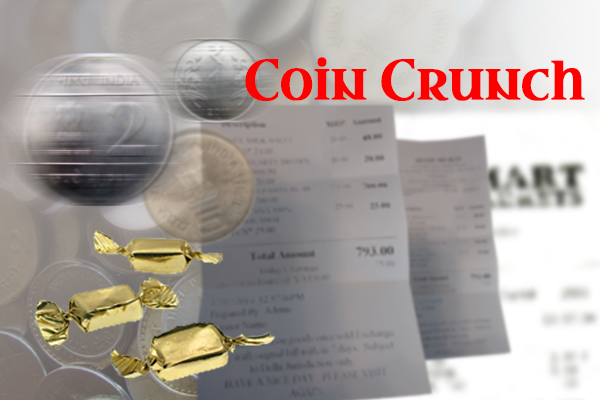 Do you have a sweet tooth? Or maybe the shopkeepers have got their wisdom tooth!

What is catching on a trend right now is shopkeepers offering candies in exchange for change.

You go to a store to buy few things and when it’s time to pay, you hand over the cash but the cashier runs out of change. He asks you for change, and if you answer no then you are likely to be awarded with toffees or a stick of chewing gums by the shop owners to make up the shortfall. Well you like it or not they in a way force you to accept it and if you make a fuss or show dislike for the toffees then they might even hand you tiger biscuits or a step ahead their cards with denominations sealed on it. Cards are rare but it seems innovations are reaching new heights.

I am sure all of you must have come across this and if you are conscious about sugar and calories then better don’t step out without change because these light weight toffees can be heavy on your pocket.

Recently when I went to buy milk from a milk store, the shopkeeper asked me for four rupees change, when I said I am sorry, I don’t have then the old man sitting behind the counter handed me two of his shop’s card with two rupees written on it. I said I don’t reside here and will not be able to avail the coupons he said I don’t have an option. He said then take tiger biscuits, I said I need Good Day, so it went on when finally after five minutes of argument he took out four rupees from his creaky money drawer. I finally won this battle of change but this is not the first and the last one for sure.

What if a man has diabetes and just can’t have candies and biscuits???

What if they don’t have what I like? Do you think I should compromise on my taste???

Anything below rupees ten calls for toffees, bubble gums and biscuits in exchange and that’s just not fair, I want those coins.

When you shop your monthly groceries at supermarkets they even offer chocolates instead of change. I do understand that because of inflation the value of money has decreased but that doesn’t mean one should be forced to have chocolates in lieu of few coins that one owes. However much you love them you want to have them at your will.

As my candy jar is over flowing with all sorts of candies, chewing gums and cough drops that too ginger and mint flavor I tried to find out the reasons.

Well there are many, I came across all sorts of excuses for why coins go missing.

When bank officials claim that coins are easily available, traders don’t even have an idea about the same.

Mostly shop owners don’t want to take the pain to get coins from banks. Salil (name changed), the cashier of a reputed super market says, “We procure coins from local vendors at a premium of 15 or 20 percent”. To my dismay I found out that he doesn’t even know that he can get the coins from any bank. So who is to be blamed???

Another store owner Jyoti in Indirapuram told me she manages by asking change from nearby shops or even auto drivers. So she has never ever knocked the doors of the bank for coins in exchange but is happy distributing candies and coupons to be redeemed later.

The manager of a popular fashion brand store in Dwarka said “there is always a shortage of coins in banks in Dwarka and so he is forced to buy it from local vendors and that too by paying 15% as commission”.

Businessmen collect coins for a premium that possibly explains the pressure on them though it doesn’t justify the exchange in any way.

However when I tried to find out the reason behind the missing coins from Bharat Chawdhary, assistant manager at SBI bank said, “coins are easily available. And if ever there is a shortage we make sure we order it and make it available for our customers”.

Speaking to a senior manager from a private sector bank, he said “coins are easily available in all banks and can also be ordered as and when needed”.

As per the RBI banking regulations local banks are required to swap notes for coins. There are vending machines at RBI offices and also various banks, which dispense bags of coins.

But according to some traders, this doesn’t happen.

May be its sheer ignorance of traders or lack of facility for the customers that this shortage has arrived.

Real or man-made, coins are definitely go missing and the problem is here to stay.