Shame on us, Bangalore stood alone! 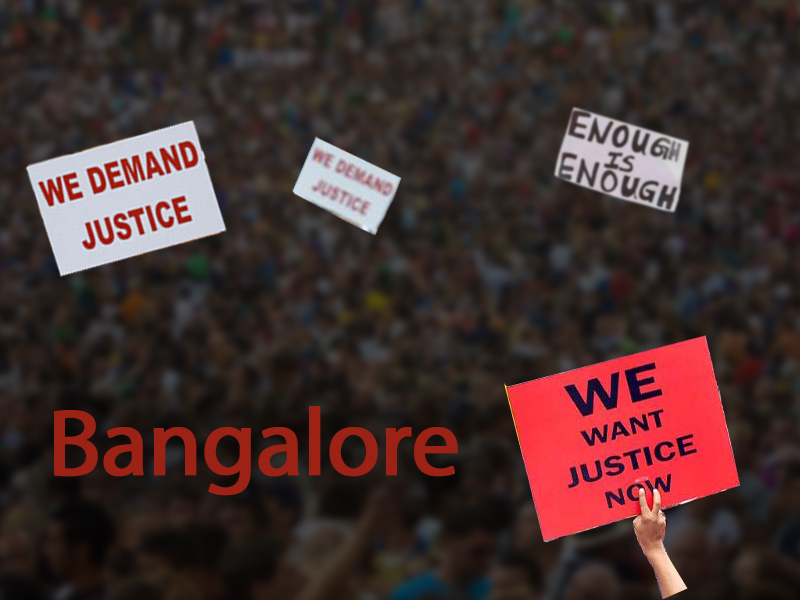 In the hours of darkness news gets the final print and with the first ray of the rising sun it enlightens the world. Sipping tea in the morning with a newspaper in hand or watching any news channel surely makes us well run and conversant with the world around us. Being aware with the happenings at 7 am in the morning does make us feel proud. We all are trapped in this web of news and day-by-day this trap is becoming stronger. Any incident in any part of the world reaches our television sets very swiftly and without any delay. This reach has made us all incredibly prompt. We all read and see news but do we really care? Or are we affected by the news around us? We read, see and forget, no matter how unsafe and insecure we are in the so-called Metropolitan cities.

News of gang rapes come and go, victims get all the possible words of sympathy and news gets the reader. But do we ever think of the mental trauma such victims face? No, as we leave those ideas for the life savior NGO’s. Gruesome murders are also always in the news, which we read, express our grief and move forward. We all read such news daily but how many of us go and try to learn self defense after hearing such scary news?

Ah! How can I forget the huge anti corruption protest a year back!!! The whole India witnessed the glory of Satyagraha. Thanks to the hundreds of cameras which kept the movement and aam janta going for days. A year back all social sites were flooded with anti corruption and patriotic slogans. Today hardly any site has an update on this big issue. Debates were held all across the nation, everyone was a part of ‘corruption free India’ dream. Hence, Satyagraha once again became the story of past only to be written in golden words.

IT’S A MATTER OF PROXIMITY

Today by the grace of hundreds of news channels, we all are pretty much aware of the happenings around us. But our action and reaction is controlled by the Proximity factor. Last year Delhi’s Nirbhaya case had set an example for our youngistan brigade by mega rally’s and protest on the streets of Delhi. The agitation and mass protest gave a clear message of non-tolerance against women violence. India Gate & Jantar Mantar have witnessed, many times such mass protests be it a candle march or a Anti corruption march. Our Metro cities have been quite a Rebel and you can call it rang de basante effect. Unfortunately this effect seems to be fading away again by a factor called proximity.

It is sad and exasperating to hear Bangalore case. We talk about unity in diversity in India, unfortunately that exists only in books. As people of Bengaluru are protested against this gruesome act, people in Delhi enjoyed their Saturday off. Jantar Mantar & India gate must have felt betrayed as Bangalore stood alone against this barbaric act. Where was Delhi’s youngistan brigade? Where was that Rang De Basanti effect ? And for that matter where was our socially active Mr. Amir Khan?

Youngistan was numb and vanished completely in the recent Budaun case too. No protest march, no agitation, no Dharna’s for one simple reason that the incident happened in a far village called budaun which I am sure would have been difficult to even pronounce for our young brigade. The name which they might have never heard before.

Proximity helps to gain understanding of information much faster. So, far off incidents fail to reach the masses attention and proximity factor dominates the whole scenario. Proximity decides the level of protest and agitation on the roads of Delhi. Rape is a rape, it cant be defined by the borders & every incident of rape in our country should be dealt with equal importance. The day our country will have strict laws for even small incidents of eve teasing, that day it will be a Rape free Nation.