‘Save the dying folk Music of India’ – Malini Awasthi

Yes! You got it right. She is none other than Malini Awasthi. 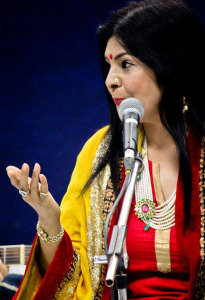 In conversation with OFFDHOOK, she opens her heart out on Folk music and its struggle of survival in India.

ODH – You have been singing for so many years and arduously working to keep alive the roots of Indian folk music. Was it a struggle or just a cakewalk?

Malini – It’s indeed been a long journey and struggle on many different levels. I am a classically trained vocalist. My very first struggle, about 25 years back was to make people understand that I want to do folk. It was difficult to break the norm of singing only classical. Folk music was considered very demeaning, crass, cheap and local. People’s perception and mindset about folk was such that issme koi sur taal nahi hota hai, lyrics bade loud hote hai aur sab chalta hai. For me it was a challenge to break the pre conceived notions but my firm belief in doing things with full conviction and making people believe in the true essence of folk, made me successful. So yes the journey was difficult.

Why folk music is dying today? 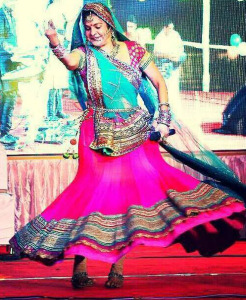 Folk come from different regions so the language becomes a small barrier. For the audience it becomes quite difficult to decipher the language. Therefore for a pure folk artist who may not be very well read and educated or who is not a good orator, it becomes difficult to talk about and explain the true hidden meaning while performing on the stage. This is a big link missing in folk music and that is why folk is dying. That is why I adopted the story telling method to explain my songs to the audience.

ODH – In a country where the local dialect is said to change every 11 kilometers, it becomes almost impossible for anyone to understand the true nature, values, and ethos of a country as diverse and complex as India. Adding to it is the steep disconnect between the cities and villages, urban and rural people. So do you think it’s the dialect, which makes folk less popular among the urban youth?

Malini – No, the reality is far different. I find the present young generation most receptive, rational and most willing to hear folk songs. I get lot of messages on social media from the young generation saying how the fok music mesmerizes them. They want to listen to all kinds of music be it pop, western, fusion, satire, and humor as they have space for everything. I think the parents need to be blamed for not having introduced them to this folk culture. Folk is like a grandmother and when today the trend of living in a nuclear family is increasing, the fashion of living separate has finished folk from our cultures.

ODH – Bollywood has glamourized the whole concept of folk songs. It has embraced and mould it in its own way primarily for the wedding scenes.

Malini – Bollywood has its own perception of folk and very few directors have got it right. Song ‘genda phool’ comes from the director who gets into the soul of story and music so adopted this song as a terrace scene and gave it a perfect look and feel. But very few people do this. Shaadi is one thing that whatever is made on it becomes hit but very few songs have seen the height of success like banno teri ankhian.

ODH – How do you plan to promote it further and give it a next level of popularity, which is indeed due?

I found my own organization SAUN CHIDAIIYA. Its a platform for the folk artists where I don’t perform, I become the sutradhaar. Its been four years and every year more than 150 artists perticipate where culture galore and music dominates.

ODH – Don’t you think folk should be taught in schools as a part of curriculum?

Malini – Yes, it should be at least as a basic two page. Knowing folk is knowing yourself, your roots. Every state should have its own folk curriculum.

ODH – You do lot of International performances as well. How does the Indian diaspora feels for its own culture? 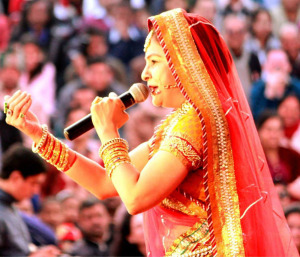 Malini – The Indian diaspora absolutely love folk. Connecting to folk means connecting to their roots, they have an urge to listen to these songs in purest form.

ODH – Your traditional attire is also very appealing and attractive.

Malini – It’s my image and I love to wear sarees always. Also in this disconnected scenario of folk music, I have to look like one.

Malini – Yes, true. There is no money, no fame & no respect. The number of programmes happening now in UP is very less than what used to be 20yrs back.

ODH – What you do in your free time ?

ODH – Talking about your family, you got married to an IAS officer. How well did he accept your love for folk music?

Malini – My husband has been utterly supportive in my endeavor. He knew I was a singer and he was going to marry an artist. He always encouraged me; even after my kids were born I kept singing and going to my recordings. Since he was a bureaucrat, so all his postings in rural areas helped me in getting more close to different dialects and culture.

ODH – What would be your message for the love of Folk music?

Malini – It’s a responsibility and accountability of every state’s media, scholars, intellectuals and rich people to promote folk. This is the only sector, which never gets sponsors. Society should promote this. The art form should be carry forward.As