FROM GOD TO GURU 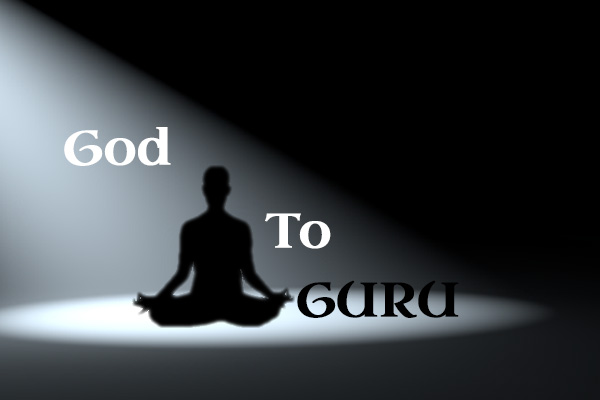 Where do you turn when life gets you down? Who do you think is your mentor, your pillar of strength amidst the turmoil? A bona fide Guru!

Today India is living in the age of Gurus, they have proliferated like never before. I may sound critical, but I am writing as an observer. I am not a follower of any such guru but my quest for one led me to one such ashram. However I still don’t know if I actually need a guru?

Far from the noise of this big city as I walk into this beautifully sculpted ashram I can smell purity, serenity, and peace. Walking past the garden I enter the hall where some people are sitting in silence, some discussing their problems and some sharing their experience about their Guru. The ambience, fragrance, music, mantras is just perfect for me to believe that this is a place I need to be in, but is that enough for me to accept him as my mentor?

Who is a ‘GURU’? And what does this guru do to enlighten us?

The word ‘Guru’ is derived from the Sanskrit language and has a deep spiritual meaning. Its two syllables Gu and Ru stand for the following:

In short, the Guru is the one who dispels the darkness of spiritual ignorance in humanity and bestows upon them spiritual experiences and spiritual knowledge.

Often referred to as Gurus, Swami’s or Satgurus, these are the wise ones who have realized the Truth and so impart the Knowledge to you. These gurus are said to acquire the transcendental knowledge from a self-realized master by humble reverence, by sincere inquiry, and by service.

India, known as the land of spirituality has seen many such masters. In the Gita, Krishna speaks to Arjuna about the importance of finding a guru. Arjuna accepted Krishna as his Guru and followed his updeshas in the epic battle of Mahabharata.

Life coach former lieutenant Mrs Rita Gangwani beautifully puts it: “A Guru is a person who has a unique blend of the extremes. He is that epitome of knowledge but at the same time humor. The best blend of wisdom and chivalry. Having a Guru brings a certainty and confidence of being ‘on track’ to our spiritual practices.”

Gurus have been known to teach the way of life and show the path of success.

However, is it that easy today to find a Bona fide Guru?

Moving on to the 21st century it’s almost a fad now to follow someone, who can enlighten us and show us the path. Such is their aura that people call him/her incarnation of God, God-like, or an instrument of God or to be precise God-man.

These God-man who now often adorn the walls of the believer’s house, are at times the reverend. Such God-man in some houses has replaced gods. Moreover these are worshiped more than the God at times.

The orientation of Gurus, Swamis and Babas has changed today. They offer a mix of religion and spirituality. They hold satsangs and give darshan where they profess health, well-being and spirituality. His talk increases the seeker’s faith and inspires him to intensify his religious practices.

Dr. Gitanjali Sharma, Life coach, Motivational Speaker feels that “most of these Swamis and Gurus are a cult now. These enlightened masters control your activities and make you dependent on them”.

From the day we step into this world, the battle for life begins. The complexities of life grow with the ever-expanding horizon. Our dependency from day one makes us dependent for the entire life. From parents to teachers to guides and gurus. This need of a guide or mentor may vary from time to time but the need always remains there. So before you go to any such master you need to introspect yourself and analyze every bit that’s making you look for one.

Mansi, who was tired of the commercial attitude of all the temples across India says her stagnant life got a headstart when she started visiting Guruji’s ashram. She tell us more about it.

“I came to know of him through an acquaintance of our family. So I visited his ashram and was amazed to see how peaceful it was. You can spend as much time as you want in the temple without anyone coaxing you donate something or hurrying you up. All you need to do is to give yourself to the peace in the ashram.

Since I’ve started visiting the ashram things have changed in my life. I have a new perspective and things have started falling in place.”

The once pious relationship is under constant criticism. Today it’s more about the Swami himself than his follower. Some give updesha, some perform miracles, some give solutions to help you get rid of your personal problems rather than on teaching ways to reach God.

A follower of ANANDA Mrs Rita Gangwani says: “I have stumbled onto lot of Swamis and Gurus in this lifetime and all of them had left me confused. But at ANANDA- where I was initiated to the teachings of Paramhansa yogananda, everything was transparent. No one forced me to follow them. I was given the glimpse of the teachings, and I found them very practical. The best part is that you need not become a sanyasi to find your spiritual enlightenment, but you can do so by living your daily life.”

DO YOU REALLY NEED A GURU – TESTING TIME

In pursuit of enlightened being, we often come across fraudulent mentors also. While some of them are there for good while some keep quoting controversies for financial irregularities, sexual abuse and, sometimes, even murder. So it gets difficult for one to idealize them.

As these spiritual masters, saints, babas don’t come with a hallmark we need to be careful and selective in following them.

I don’t mean to offend when I say that but before settling (we act like consumers here) put them to your own test. You need to find out who is a saint and who is a swindler.

The seeker should test him/her by assessing whether their words are full of wisdom, and whether they put into practice what they preach. And most importantly, the spiritual master represents God and does not try to become God.

According to Dr. Gitanjali Sharma, Life coach, Motivational Speaker, one should seek a mentor who has a scientific approach towards life. One who helps you connect you with your inner self and makes you independent and motivate you. However these days Swamis mostly do faith healing.

However we often get hooked to the superficial world out there to the world of glitter and glamour. We go out in pursuit of everything else but our own selves. In this never ending chase of happiness, success and peace we forget the inner wisdom within us, and so the chase goes on and on.

To know when actually one need a guru and when you can be your own guru is quite important. Some believe that seeking a guru is an addiction and we need to defeat it and gain control of our life.