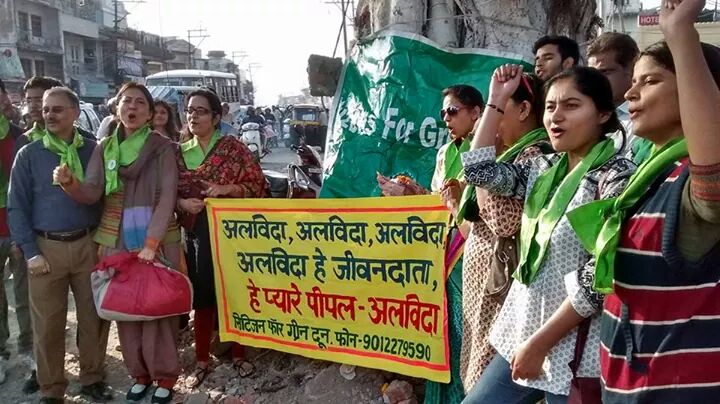 The tree of knowledge, the tree of life and the tree of many benefits is the Peepal tree. Loaded with medicinal benefits and religious sanctity, this tree is here to stay.

Recently, the capital city of Uttarakhand, Dehradun, witnessed a fight of survival of a hundred year old Peepal tree. In an attempt to widen the road, administration decided to cut down the tree. Standing tall and healthy just opposite ‘Prabhat Talkies’ as the only tree beside the road on the whole stretch from clock tower to Bindal bridge area. It was on the verge of being assaulted on the only allegation of being an obstruction in smooth flow of traffic. With the vigilance of some concerned citizens of Dehradun and some NGO’s like Waste Warriors & citizens for green Doon, a protest was initiated against the act of cutting down a tree. 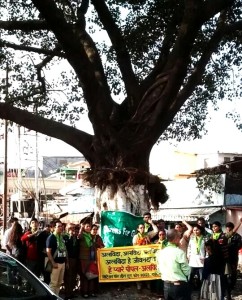 People huddled around the tree

“ As soon as we got to know about this issue, we started a campaign by involving residents of the local area. After getting a positive response we huddled around the tree and shouted slogans and also talked to people around trying to create awareness about the issue”said Shivang of Waste Warriors. He also added that “ The tree is very well on side of the road, which now has been widened quite substantially and thus there would not be any obstruction to the traffic whatsoever”.

Ashish, a social activist, observed the felling and immediately made an attempt to stop it. His attentiveness and timely interference made things possible. “ Felling of trees is just not acceptable, so when once passing by that area I saw this, I contacted all the NGO’s and 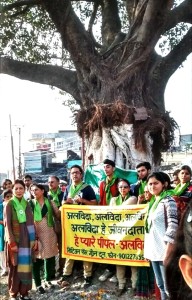 got their support. Our campaign also got positive response on social media. Reaching out to the DM & MLA also helped in our endeavor”said Ashish.

Taking people’s help in the era of social media is not a big deal et all. To save the illustrious peepal tree, a campaign was launched online. A petition was written and signed by around 200 citizens of Dehradun. As a result on October 29th at 3 P.M. local residents gathered around the tree to voice their support for a cause. Besides this an application was also submitted to the area MLA Mr.Rajkumar and District Magistrate Mr.Chandresh Kumar, who assured the citizens to look into the matter.

After all the protest and halla bol a ray hope emerged in the form of WILDLIFE PROTECTION ACT. It’s an act of the Parliament of India enacted for protection of Plants and Animal species. It extends to the whole of India except the state of Jammu & Kashmir, which has its own Wildlife act. This Act of 1972 forbids the felling of nest-laden trees till the eggs in the nests are hatched and the birds fly off. And in case of any violation, the offender may face three years of Imprisonment.

For the sacred Peepal Tree in Dehradun Wildlife Protection Act came as a Life Saviour. ACCORDING TO “SECTION 2 SUB-CLAUSE 16 (C) OF THE WILDLIFE PROTECTION ACT (WPA) 1972, INJURUNG OR DESTROYING OR TAKING ANY PART OF THE BODY OF ANY SUCH ANIMAL OR IN THE CASE OF WILD BIRDS OR REPTILES, DAMAGING THE EGGS OF SUCH BIRDS OR DISTURBING THE EGGS OR NESTS OF SUCH BIRDS OR REPTILES IS A CRIMINAL OFFENCE AS IT IS AN ACT OF HUNTING OR ATTEMPT TO HUNT. THE OFFENDER CAN BE BOOKED UNDER A CRIMINAL CASE”.

This particular tree at Chakrata Road of Dehradun is also a nesting site for lot of wild birds, which can easily be seen at present. Taking this in consideration, cutting down of the tree has been called off. As felling the peepal tree will make many birds homeless.

Today our Peepal tree is safe and standing tall and healthy in the heart of the city called Dehradun. But the question is how many of us are aware of such Wildlife Acts? Our constitution has given us so many rights that we are not even aware of, forget about a need to know a Tree’s right? This time our Peepal tree was lucky enough to get saved from this brutal act but what about tomorrow, when another tree will be felling and no passers by will stop to save it?